"Ian has become a trusted and valued member of our team who just doesn't work here all of the time."

Current State:
The product experiencing the highest level of increased demand was Office Screens.  This was a multi-stage process which had stations spread across the shop floor and a batch system was employed at each stage.  Assembly personnel would move about from stage to stage as and when batches were completed at a stage.  At the end of each day, production would stop to facilitate the packing of all the product produced that day ready for collection by courier.

There were two other primary manufacturing centres, one which focused on Aluminium framed product and another which produced PVC framed product.

Each manufacturing centre was supplied with wood, aluminium and PVC parts in various standard lengths from a Cutting area at one end of the factory.  This area was continually under pressure with demand for parts coming from multiple centres at the same time.  Occasionally, this led to production in one or more centres stopping waiting for parts to be cut.  It had also forced the business to consider recruiting additional resource for this area.

At the other end of the factory was a Packing centre which packaged the Aluminium and PVC products manufactured each day.

Three sides of the factory were racked out to hold stocks of packaging, covering materials (rolls), accessories etc etc.
This photograph shows the adhesive application machine used in the process of manufacturing office screens.  Some of the completed frames waiting to be processed can be seen stored in the racking behind the machine.​ 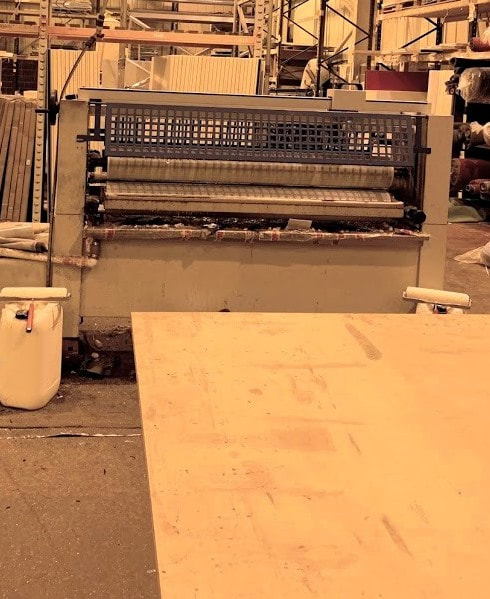 This photograph shows the Material Covering table following the application of the adhesive.  The roll of material can be seen at the head of the table waiting to be rolled out over the frame. 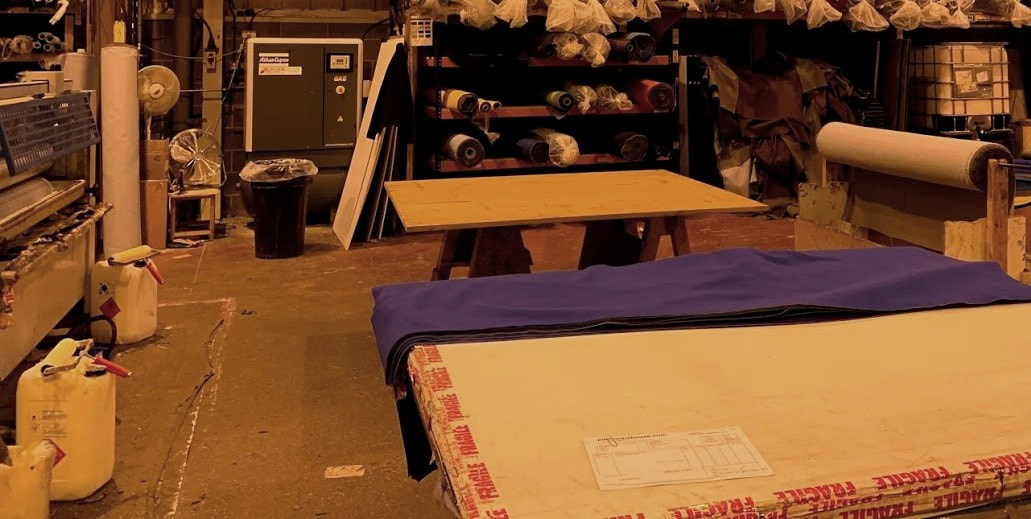 Future State:
Office Screens:
The team were trained in the principles of Lean Manufacturing, focusing on line balancing and single piece flow, and then tasked with considering what changes they could make to their process based on what they'd learnt.  Immediately they could see the relevance and a three stage process was developed, with two people permanently assigned to each stage (a saving of one person from the Current State).  The work content was divided up so that each stage took approximately the same time so that single piece flow could be introduced.  Additionally, the work content of stage 3 included the packaging of the product, thus extending the amount of time each day that could be spent producing.  By the end of the training day, the team had marked out on the shop floor where all of the machines, assembly tables and parts were to be located to create a Flow line.
Once the layout changes had been made and the team settled with the new working methods, a Short Interval Control board was introduced to provide a visual display of the teams performance against target on an hour-by-hour basis.
Aluminium & PVC:
The creation of the Office Screens Flow line on one side of the factory then facilitated the moving of the other two manufacturing centres alongside it to create three Value Streams side-by-side.  It also allowed the Packing Centre to be incorporated into the central factory area thus freeing the fourth side of the factory to be racked out for additional storage if required as volumes continued to grow and grow.  Additionally, by moving these two manufacturing centres closer to the Cutting area, it significantly reduced the distance needing to be travelled delivering/collecting parts.  A similar process management system to that employed in Office Screens, the Short Interval Control board, was planned to be introduced into these two centres.
Cutting Area:
To further reduce the pressure upon the Cutting area, a series of kanbans were created between the Cutting area and each Value Stream which would hold approximately 4 hours worth of all the various standard lengths of parts each Value Stream used.  The parts were loaded into the kanbans on the Cutting side and emptied from the Value Stream side further reducing any travelling associated with delivering parts meaning more cutting time for the Cutter.  The empty kanban was easily visible to the Cutter and would signal that this part would need replenishing but it meant that no "immediate" demand would be placed on the Cutting area from any Value Stream allowing the Cutter to plan what he needed to cut and when.  Also, no production stoppages waiting for parts would occur.
Additonally, since Office Screens were the biggest growth area, another technique was used to average out the demand for parts for this Value Stream to control the time spent daily on parts for this Value Stream.  T​he following spreadsheet shows how the seven months of Sales data was analysed and broken down to quantities used on average during a day to attempt to level the demand on the Cutting area for wooden parts: 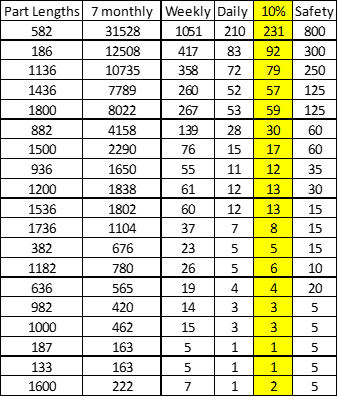 Across the size range of Office Screen sold, it was calculated how many pieces of each part length were used in each product and multiplied by the amount of screens sold of that size over the seven months. This then gave the total number of each individual piece length used in all of the screens sold in the period, the column headed "7 monthly". This amount would automatically include the surge in Sales experienced by the business up to that point.  From this total amount, a daily average was calculated and 10% added to allow for further growth in Sales.  The 10% column therefore represents the levelled demand for wooden parts for the Cutting area.  Finally, a "Safety" amount was calculated to cover for daily fluctuations in sizes sold to cover worst case scenario.

As a result of these changes, the business shelved plans to recruit additional resource for the Cutting Area.
Workplace Organisation:
To raise the standard of tidiness and cleanliness throughout the factory, all staff were trained in the 5S methodology and then given time to apply the methodology to their work areas.