"With many years of hands on experience, a logical thinker and someone who is able to communicate his advice, support and follow up in a clear and succinct manner, Ian was just what we needed."

These pictures show notations on flip chart paper of opportunities for improvement identified following analysis of the current process:
​

Phase 2
Towards the end of Phase 1, a restructuring of the Production Management team took place.  A new Production Manager was identified but Paul Adams recognised that he required some further support if the opportunities from Phase 1 were to be fully delivered.  IW Process Solutions were commissioned to mentor the new Manager through his initial 6 month period in the role to equip him with the necessary skills and knowledge to deliver the improvements.  At the end of the 6 month period, significant improvement had been made in the majority of areas with all key metrics being on or above target.
"It was apparent something wasn't right, we could see that efficiencies' had been reducing.  I contacted Ian to discuss his thoughts; to get an opinion from someone outside the business.
From the first meeting Ian's knowledge and insight was obvious; sometimes you just need to see it from another perspective.  A vastly experienced consultant, whom is extremely personable which helps when you are trying to implement changes!!  Ian had the team buying in to collective ideas results speak for themselves.

We have only looked at part of the business and already have plans to see how we can improve others. An insightful and very successful project - I would 100% recommend IWPS.  Thanks Ian."

This photograph shows the condition of the assembly area before the project commenced. 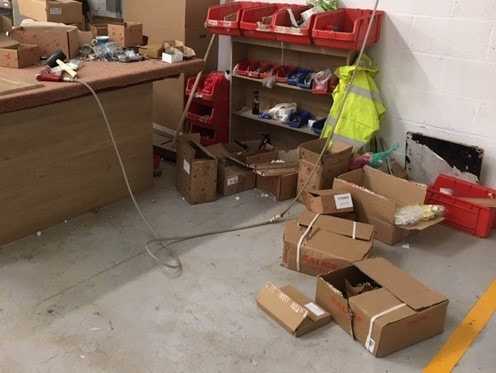 The project was delivered in a number of Phases.  Throughout each phase, following each visit, an action plan was created to drive the Operational Management team to progress

Notice boards were set up in the Assembly and CNC areas to display these charts on a weekly update basis.

Phase 2 – Material Control / Planning
The WIP holding area between CNC and Assembly was modified to limit the amount of pallets of work which could be held and CNC operatives directed to switch off if WIP capacity level reached.  The area also included a “Fast-Track” lane for orders which had been skipped due to late delivered components.

Weekly Plan developed to split work between CNC1 and CNC2.  System set up for Warehouse Manager to review weekly plan before issuing to advise as to which orders did not have all components available on site so those orders had to be skipped.  List of missing items fed back immediately to Procurement for them to chase.  Number of shortages reduced drastically throughout the project due to work done by the Procurement team.

Phase 3 – Layout
Assembly area was disorganised so the layout of the area was changed to accommodate “Standardised” workstations set out in the most effective way.

Phase 4 – Workplace Organisation
Having developed standardised workstation layout, the area was cleaned, painted and re-demarcated.  New stock shelving units were built as part of the standardised workstation which were set out using a two-bin Kanban system with daily replenishment carried out on all workstations by Warehouse personnel.  The introduction of the Kanban system allowed:To support the project throughout, operatives were trained in Lean Awareness and the 5S Workplace Organisation methodology to develop an understanding of the changes planned and the reasons why.

These photographs show the Assembly area following it’s re-organisation.  The workbenches are standardised and each have a storage rack which incorporates a shadow board for tools.
"Ian is a Lean consultant who has worked with a wide variety of manufacturing businesses to support, train and implement Lean processes and thinking into their working methodologies, which is exactly what we were looking for. I found Ian to be a realist with a good sense of humour which helps to get his messages across.  He engaged with our Operational management team to effect change, using a structured approach to denote actions and accountability, which ensured that the project maintained impetus.  I would highly recommend Ian to other companies."